The calculator on this page provides a means of calculating:-

Graphical Summary of the Calculator 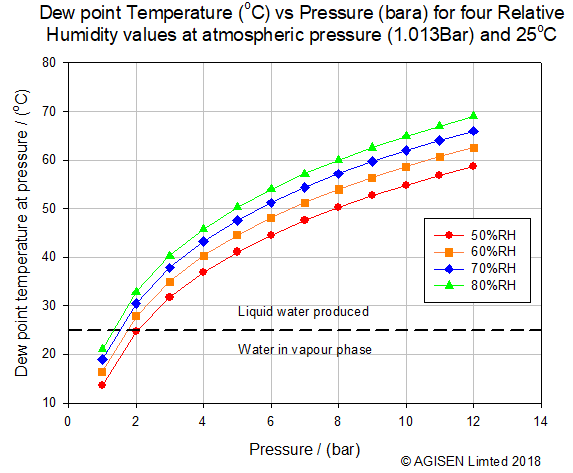 This graph provides an indication of the relationship between the pressure dew point temperature and the amount of compression the ambient air has been subjected to.   The graph shows this relationship for four value of ambient %RH, (50,60,70 and 80%).  It can be clearly seen that even when mildly humid air is lightly compressed liquid water is produced.

Looking at the curves more closely it is also possible to postulate as to why, under some high-usage conditions, that water is can be liberated in such large quantities downstream of the receiver – near the tools and processes for which the air is used.  In some high-use conditons, where the temperature of the air at the reciever has built up to temperatures above the pressure dew point, no water will be liberated for the water vapour leaden air.  It is only further down the system, where the air has had time to cool further, that the majority of the water will be liberated.  This is proably the reason why, on some humid days, the water traps and drains on a system seems to overflow and exhaust very quickly.

It should be obvious that ambient air with a higher realtive humidity would make this effect more likely.  Also in general there would be much more water vapour available which could be turned into liquid water. 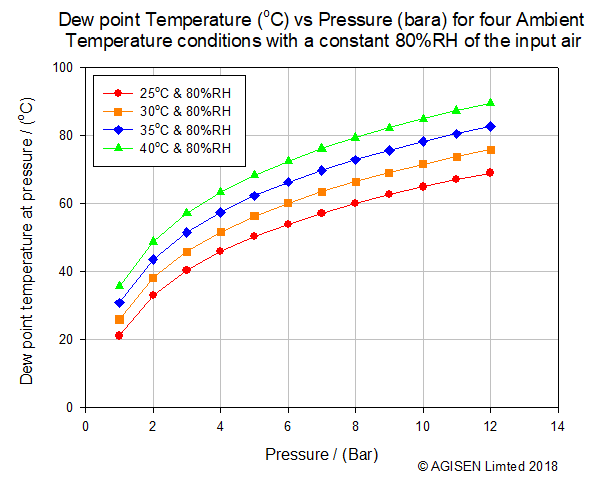 The situation is slightly improved if instead of operating at 25

the temperature of the ambient air is higher.  The graph below gives some indication of this temperature relationship.

This graph shows the effect of a higher ambient air temperature. Pressure dew point temperatures are further elevated leading to more water being liberated in the parts of the compressed air system closer to the compressor, i.e. the receiver. However, with a higher input temperature the ambient air is capable of holding a significantly larger amount of water vapour. The water is all contained within the system and without suitable control it can manifest as liquid water and present problems throughout the system.

An introduction to Dry Tank Technology